Brian Brennan was previously featured on Reading Recommendations in Nov. 2013 and is back now to tell us about the re-publication, in eBook only, of a book that was previously published in 2002 by Fifth House. 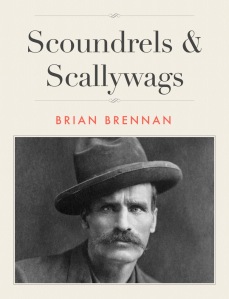 Alberta has a reputation for attracting and producing characters with little respect for the law and less for public opinion. In this collection of biographies, Brian Brennan profiles some of the flamboyant, eccentric and downright bizarre people who established this tradition.

Adventurers, criminals, eccentrics, rogue politicians and other scandalous types all come to life in the pages of Scoundrels and Scallywags.

Meet Bill Peyto (pictured on the cover), the legendary mountain man who once let a lynx loose in a saloon to see how quickly the drunks could escape. Or Calgary’s notorious prostitute Pearl Miller, who left such an impression with Canadian soldiers in the Second World War that they responded to the American sign “Remember Pearl Harbor” with “To hell with Pearl Harbour, remember Pearl Miller.” Or Elizabeth “Sweaty Betty” Abbott, an Edmonton slum landlord known for punching out abusive husbands and taking care of their battered wives. Or the reluctant Lord, Fred Perceval, who inherited the title Earl of Egmont but decided after living in his English castle for a few years that he really wanted to be a rancher after all.

They come from all corners of the province and they’re a wild and unruly bunch, but Alberta couldn’t be prouder of them. Scoundrels and Scallywags is a salute to those who have lived within Alberta’s borders – but outside the boundaries of convention.

“A collection of riveting tales about the adventurers, eccentrics and outlaws who dared to be different, and who definitely would not tolerate being ignored.” – Western Living Magazine

“Here is Alberta history in bite-sized, easily digested portions, a lively and entertaining romp through the years.” – Calgary Herald

Here’s where to purchase Scoundrels and Scallywags:

2 thoughts on “Brian Brennan – update on a republication”