I discovered the writing of Bob Van Laerhoven recently when Jack Eason promoted his longtime friend. I took particular notice of this author, because he is Flemish-Belgian, just like my grandparents and mother who emigrated to Canada from Belgium in 1919. (I wrote about my grandfather previously on my other blog.) Bob has been a pleasure to work with in preparing this promotion post and I’m very pleased to now present to you “a fellow Belgian”!

What is your latest release and what genre is it? Dangerous Obsessions, published by the Anaphora Literary Press, is a collection of short stories, set in different countries and time-slots. It’s a bit difficult to describe the genre. In general, I try to write cross-over between literature and the mystery genre, but in this collection the “connecting factor” is that all the stories, except one, take place in war-zones. They are not tales of pure mystery. Let’s just say that the stories are “noir” and that I try to write in a style that is appropriate for the “mood” in each story. I’m a novelist at heart, I don’t write many short stories, but I consider them an excellent introduction to my theme(s) and style(s). My novel Baudelaire’s Revenge, published by Pegasus Books in 2014 in hardcover, and in April of this year in paperback, has stirred up a lot of response in the USA. Some find the novel “controversial” and I take that as a compliment because Charles Baudelaire, the main subject of the novel, was controversial in his time, the 19th century, too.

It’s not easy for an author from a small language community – Flanders has 5 million people, to venture into the vast English-reading market. Therefore I’m happy with this fast “follow up” on Baudelaire’s Revenge with Dangerous Obsessions while the last details in the translation of Return to Hiroshima, my second English-translated novel, are being completed.

Quick description: I chose for variety in Dangerous Obsessions: different settings and different styles. I was a travel writer in conflict-zones from 1990 till the end of 2003 and echoes of my experiences trickle through these confronting tales, set in civil war-torn Algeria in the fifties, in a gypsy-populated concentration camp during WWII, in a Peruvian border-town where stealing is a deadly art, in Liberia during the civil war in the nineties, and in Belgian Congo during the bloody uproar in the sixties. 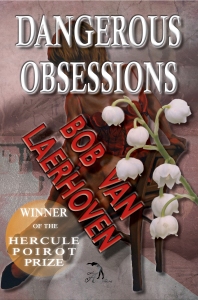 Brief biography:
A fulltime Belgian/Flemish author, I made my debut as a novelist in 1985 with the novel Nachtspel (Night Game) and quickly became known in Flanders for my ‘un-Flemish’ style and my kaleidoscopic novels in which the fate of the individual is closely related to broad social transformations. I became a full-time author in 1991. As a freelance travel writer I explored conflicts and trouble-spots across the globe from 1990 to 2003: Somalia, Liberia, Sudan, Gaza, Iran, Iraq, Myanmar, Lebanon, Mozambique, Burundi… to name but a few.

During the Bosnian war I spent part of 1992 in the besieged city of Sarajevo. Three years later I was working for MSF – Doctors without frontiers – in the Bosnian city of Tuzla during the NATO bombings. At that moment the refugees arrived from the Muslim enclave of Srebrenica. I was the first writer from the Low Countries who had the opportunity to speak with the refugees. These conversations resulted in a travel book: Srebrenica – getuigen van massamoord (Srebrenica. Testimony to a Mass Murder). The book denounces the murder and torture of the Muslim population of this Bosnian-Serbian enclave and is based on first-hand testimonies. I concluded that mass murders took place, a notion that was questioned at the time but later was proven accurate.

In 2007 I won the Hercule Poirot Prize for the best mystery novel of the year with De wraak van Baudelaire. In 2013, the French translation La Vengeance de Baudelaire was published in France and in Canada. The English translation, Baudelaire’s Revenge, was published in the US by Pegasus Books in 2014. Also in 2014 came the publication in France and in Canada of Le Mensonge d’Alejandro (Alejandro’s Lie), a second novel in French translation. Baudelaire’s Revenge won the USA Best Book Award 2014 in the category “mystery/suspense”. Currently, the English translation of Terug naar Hiroshima – Return to Hiroshima is almost finished. A French translation is in the making. In April 2015, The Anaphora Literary Press released the collection of short stories Dangerous Obsessions in paperback and in e-book.

What are you working on now?
I’m working on a new novel in Dutch (I have spent my advance already some months ago, so my Dutch publisher is frowning and yelling that there is also a writer’s life outside being translated and published abroad and that I must not forget the country in which I was born. The novel is set in Berlin in 1922. Paul Van Ostaijen, a famous Flemish avant-garde poet, is one of the main characters. This WIP is a mix of a literary novel, a mystery with a grim social background, and an unusual love story. I don’t have a title as yet, but luckily I have progressed during the past two months to roughly two thirds of the novel. But there is still a lot of work ahead. Usually, I write 3 to 4 versions before I’m satisfied…

Bob’s reading recommendation:
The very elegant Italian author Curzio Malaparte with his novel “De Huid” (The Skin). This is a master stylist who writes phenomenally about WWII. His novels are really fascinating.