What is your latest release and what genre is it? Black Cat in the Shadows – poetry ; movie short script

Quick description: The cafe of the Black Cat, the famous Le Chat Noir of fin de siecle Paris, was the gathering place of bohemians, royalty and everyone in between – aristocrat to street walker. As well, the Black Cat was noted for its entertainment, innovation, and absinthe. It is the author’s hope that some of that essence of the Black Cat can be found within these pages. 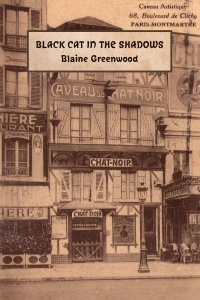 Brief biography:
Blaine Greenwood, born in Viking Alberta 1951, is an educator by profession – with a career spanning from classroom teacher to museum educator and event planner. It is from this foundation that Blaine’s poetry has come to reflect his interest in psychology, history and spirituality. His verse has been described as “dark, homespun, sensual, rich with images.”

A selection of his poems have been published in the Interpscan Journal (Canada), in Our Journey (Oregon, USA), and in Mudlark Press’ Rags: Journal of Creative Writing 2003 2004 and on websites Astropoetica 2004, Vincent Van Gallery 2003. Blaine has presented his poetry in Calgary at the Poetry Orgy 2009 hosted by the Single Onion, at Waterton National Park’s Bear Grass Days, Lethbridge’s Peace through Poetry campaign (2002) and StreetFest (2002 / 2003) as well as the Fort Macleod’s South Country Fair (2002 / 2003) with him being a featured main stage performer at South Country Fair 2003, He was one of the local writers at Lethbridge, Alberta’s Word on the Street 2012 and read in Philadelphia PA at Robyn’s Bookstore. Blaine was one of the Coordinators of MOST VOCAL Poets Society.

He is currently one of the artistic directors of Lotos Land spoken word / poetry venue at Fort Macleod Alberta’s South Country Fair and a past main stage performer. He is currently the DJ for CKXU’s Not Your Mother’s Poetry and has participated in 100 Thousands Poets for Change event 2013 – 2015.

Blaine holds a B.Ed. and Diploma in Educational Media from the University of Alberta and lives in Lethbridge, Alberta with his wife, Dee

What are you working on now?
I am working on several different manuscripts.