What is your latest release and what genre is it? Few Far Fallen, Book One of the Rone Cycle – a dark, epic fantasy

Quick description: The Dalin clan are indeed far fallen; the towers in their northern home are deserted of all but memories. The ritualistic murder of one of their own leads to the revelation of old feuds re-awoken, while rival city-states are eager to wrest away what’s left of the Dalin’s failing power. Warlord Gor Dalin is torn between ingrained loyalty to a people who see him as an outsider, and the core humanity he possesses in spite of the bleakness of the world crumbling around him.

Gor, and the few that stand with him, come to realize that even as World’s End draws near, there are some things that cannot be borne. The few and far fallen are all that stand against threats from the Outside.

Brief biography:
I’ve been an avid reader, collector, and advocate of speculative fiction all of my reading life. I spent many years studying and working in various cities on two continents, before finally returning to my prairie hometown.

I have been working in architectural practice ever since, snatching time, whenever I can, to write.

I live in Winnipeg, Canada, with my wife and daughter

What are you working on now?
I’m currently putting a final polish on the second book in the series, and finishing the alpha version of the third.

What is your latest release and what genre is it? Mystical High (Book 1, The Desert Series) – YA Paranormal

Quick description: In Mystekal, a small, dying town in the Southern California desert, only 75 students attend the old, sometimes creepy high school dubbed “Mystical High,” where strange things have been known to happen. Jessie Dalworth and Jinxsy Patterson are juniors and lifelong best friends. At home, Jessie deals with the pain of an absentee mother who has abandoned the family for the lure of Hollywood; Jinxsy contends with a 17th “birthday present” she never wanted or expected.

Meanwhile, at school, the unexplained activity begins to escalate when Jinxsy keeps seeing a long-haired guy in the hallway checking her out. Jessie can’t see him, but her younger brother, River, can.

Then, in English class, a stapler mysteriously flies off teacher Eve Carrow’s desk, hitting a student in the face who has just mouthed off to her. The beloved teacher is in the unenviable position of having her brute of a father as principal, so she hates sending any student to his office. As Principal Ernest Carrow begins to terrorize Eve and others more openly, something or someone unseen decides that it’s payback time.

School is getting stranger, and Jinxsy and Jessie are faced with mind-boggling changes in their home lives that complicate everything. When a string of shocking events expose explosive secrets, decades-long mysteries are finally revealed. 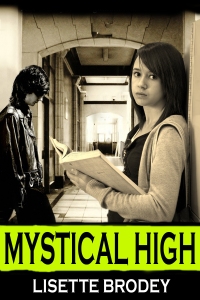 Brief biography:
Lisette Brodey was born and raised in Pennsylvania. After high school, she moved to New York City where she attended Pace University and studied drama. After ten years in New York, several of them working in the radio industry, she moved to Los Angeles, where she held various positions at Paramount Studios in Hollywood and CBS Studio Center in Studio City, CA. Back on the East Coast, she worked for many years as a freelance writer, specializing in PR and the entertainment industry. In 2010, she returned permanently to the Los Angeles area. She is the author of four novels.

What are you working on now?
I’m working on writing book 3 of The Desert Series. Book 2, Desert Star is finished and with my editor right now. I hope to publish it by the end of the summer