Mike Robbins has visited Reading Recommendations a couple of times previously, here and here. He’s back now to tell us about a very timely essay he has just published. (Mike also answered my recent call for book reviewers, for which I am extremely grateful!)

“When the people shall have nothing more to eat,” said Rousseau, “they will eat the rich.” But the rich are rather good at getting the poor to eat each other instead. In this provocative novella-length essay, Mike Robbins looks at how the British electoral system, social media, bullying by business, and a growing gap between rich and poor have led to deep fissures in British society. These have been exploited by those with an agenda of their own. As a result, democracy is now fragile. To repair it, we must look hard at the way information cycles through our society, and how our opinions are formed.

Where to purchase copies:
Amazon UK
Amazon US
(also available on the other Amazons)
Google Play
Barnes & Noble
Scribd
Kobo 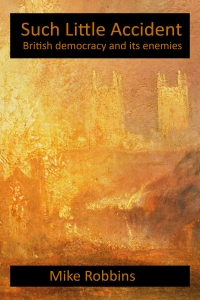