Today’s Reading Recommendation is an author living in Calgary who I have known for several years. In fact, I met Randy McCharles at a talk I gave at the Calgary Public Library when he was the first person to buy a copy of my (very) recently released eBook! I wanted to give Randy an extra shout-out here at the beginning of his promotion because, as is typical of him, he has been very humble in answering my questions regarding his non-authorial accomplishments in the Calgary writing community. For instance, Randy conceived and has become the Grand Poobah of the extremely successful annual conference, When Words Collide, that dares to promote and celebrate authors, books and writing of ALL genres. This year’s conference takes place next weekend, Aug. 8-10, and it sold out in record time, long ago, so even if you happen to be in Calgary you won’t be able to attend unless you’ve already registered. However, keep this conference in mind for next year – it’s a good one, and is growing with every new year! Now, here’s Randy to tell you about the authorial side of his life!

What is your latest release and what genre is it? The Necromancer Candle – Contemporary Fantasy

Quick description: The Necromancer Candle is a collection of 3 contemporary fantasy novellas that combine mystery and humor. Everyday people face ancient evils while dealing with modern relationship troubles. Emotions run from horror to despair to anger to laughter. Enjoy the ride! 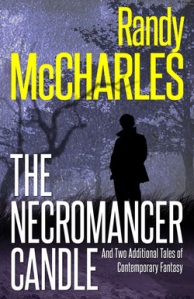 What are you working on now?
I work on multiple projects at once. Much Ado About Macbeth is a contemporary fantasy in its final draft. When drama teacher Paul Samson decides to put on a High School production of Macbeth, he forgets that it isn’t just The Scottish Play, it is The Cursed Play. And Paul soon learns just how cursed. After grappling with his principal, the PTA, his family, and his students, he must contend with witches, ghosts, and skeletons from his past. The show is destined from the outset to end badly, but no matter how desperate or dangerous circumstances become, Paul cannot cancel the play. Theater has but one rule and one rule only: the show must go on.

In earlier stages is A Connecticut Gumshoe In King Arthur’s Court. Sam Sparrow was a bad cop and a worse private detective. But when he is miraculously whisked away from certain death at the hand of hoodlums, only to find himself working cases in King Arthur’s Court, it may just be the chance he needs to address his trust issues while at the same time proving himself worthy of his elusive idol, Sam Spade.

Randy McCharles was previously featured on Reading Recommendations, Jan. 23, 2014, as collaborating member of The Apocalyptic Four.